Perhaps you already know us for our triennial meeting, The Berkshire Conference on the History of Women (“The Big Berks”) Launched in 1973, it is now the largest gathering of its kind in the world.

Members are invited to our annual retreats, where many scholars begin their relationship to the organization in an atmosphere designed to promote friendship, relaxation, and networking. Feel free to click around our site to read more about our history, our governance structure, our prizes and our committees. We hope that when you learn more about us you will want to join at the level that is comfortable for you.

The United States is a nation founded on the ideals of democracy but also on a system of white supremacy. January 6, 2021 saw seditionists attempt to overthrow the US government and occupy the US Capitol in Washington, DC. Insurrectionists were able to occupy the Capitol because white supremacy allows white people to move freely, rebel, and inhabit their bodies – and state spaces – in ways denied racialized people in the US.

We represent academic and professional organizations, and we condemn, unequivocally, the attempted insurrection against the US government on January 6, 2021. We affirm the results of the November 2020 US presidential election and recognize President-elect Joe Biden and Vice-President-elect Kamala Harris.

We are here to bear witness and to record the social, cultural, and political forces that impact our lives and to say unequivocally that we support US democracy and are committed, as scholarly, intellectual, academic, and professional organizations, to condemn the white supremacy and intersectional oppression that undergirds the belief and actions of the seditionists who committed treason and attempted to overthrow the US government.

This statement is adapted from the AAAS statement, “We Support Democracy”

On September 17, 2020, President Donald Trump announced his intention to create a national commission to promote “patriotic education.” The hastily convened “conference” held at the National Archives did not advance our understandings of history, but served only to mobilize white supremacist ire with its attacks on the New York Times’ 1619 Project and other historical scholarship that focuses on previously unseen groups.

In his remarks, the President called for the discrediting of decades of research and analysis by historians dedicated to presenting a nuanced perspective of the American project, including the kinds of intersectional work done by many of our members. This work uses the tools of Critical Race Theory, feminist theory, and queer theory to better understand the totality of the American experience. These are not, as the President called them, “radical ideologies,” but rather considered approaches based on evidence and argument that expand our understandings of American politics, society, and culture.

In his September 22, 2020 Executive Order on Combating Race and Sex Stereotyping, President Trump has also banned the federal workforce, the uniformed services, and federal contractors from all mentions of implicit racial and gender bias in any federally funded training or work setting.

As an organization committed to the promotion and exploration of the histories of women, genders, and sexualities, the Berkshire Conference of Women Historians opposes the twisting of the anti-racism legacies of the Civil Rights movement into a call to reject “racialized views of America.” Refusal to engage with issues of race, gender, and sexuality do not make those issues disappear. We encourage members and the general public to read the statement by the American Historical Association (to which the Berkshire Conference is a signatory). Our Vision Fostering friendship, and the exchange of ideas, among a global network of feminist historians. Our Mission Promoting the interests of women historians, their allies and friends. Our Purpose The Berkshire Conference of Women … END_OF_DOCUMENT_TOKEN_TO_BE_REPLACED 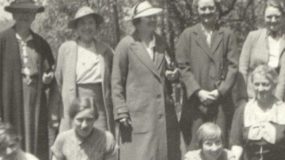 The Berkshire Conference of Women Historians was founded in 1930 by Louise Fargo Brown of Vassar College and Louise Ropes Loomis of Wells College. Initially called the Lakeville History Group, after the Connecticut retreat where early meetings were … END_OF_DOCUMENT_TOKEN_TO_BE_REPLACED Berks-Affiliated Panels at the American Historian Association (AHA) Conference Seattle, WA, January 7-10, 2021 Call for Complete Panel Proposals The Berkshire Conference on the History of Women, Genders, and Sexualities, as an affiliate of the … END_OF_DOCUMENT_TOKEN_TO_BE_REPLACED

Welcome to the Big Berks 2020: A Virtual Sampling ~ While we could not be together at Johns Hopkins University in May, the spirit of the Big Berks 2020 persists. To nurture our remarkable community until we can gather together again, we are happy to share a small taste of the program. Join us when you can! Some events are … END_OF_DOCUMENT_TOKEN_TO_BE_REPLACED

Become a Member The Berkshire Conference of Women Historians is a vital network of scholars that welcomes all women in the historical profession. We offer two kinds of events: our triennial … END_OF_DOCUMENT_TOKEN_TO_BE_REPLACED

The Berkshire Conference is a member-driven organization, which means that we are eager to hear from you. Have ideas about how the website would work better for you? Let us know! Our Executive Director will get back to you within two weeks, even just to let you know how we plan to … END_OF_DOCUMENT_TOKEN_TO_BE_REPLACED